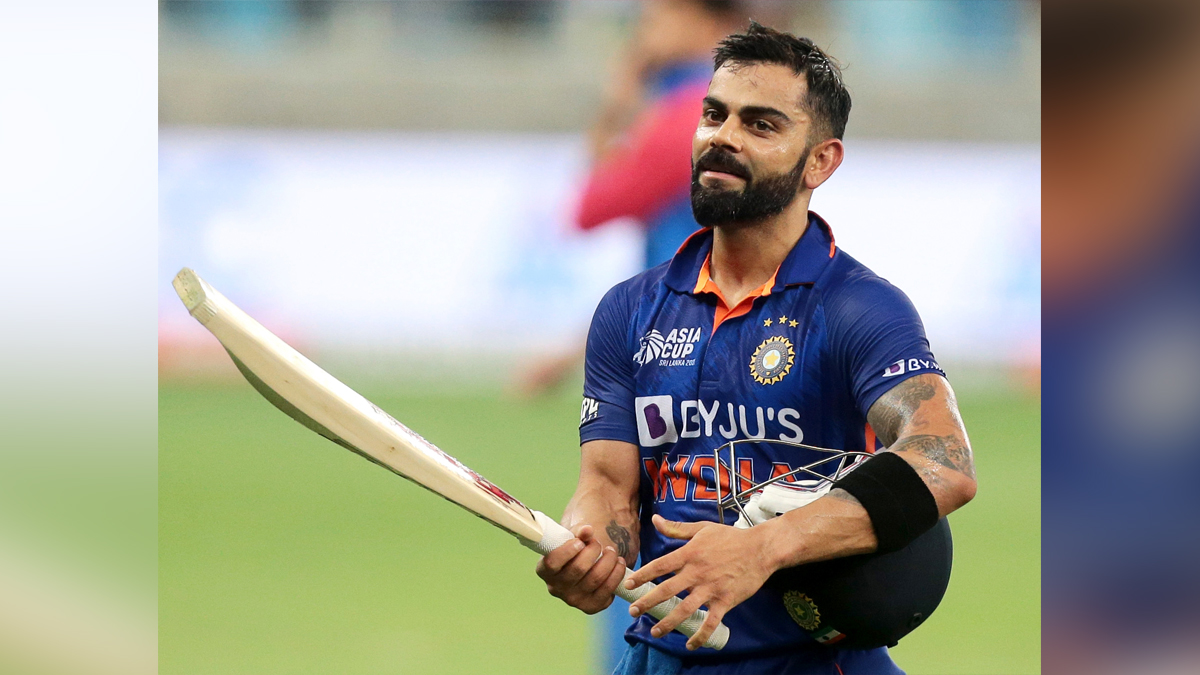 My only goal in Asia Cup was to improve; T20 World Cup is our target : Virat Kohli

Dubai : Former India captain Virat Kohli said following his century-making effort against Afghanistan in the Asia Cup Super-Four stage that he had come into the tournament with only one goal to try and work on the things he needed to improve from a team’s perspective.

“My only goal (coming into the Asia Cup) was that, all those things I needed to improve from the team’s perspective, I will come and try in the tournament,” said Kohli, who struck his 71st international century in the massive 101-run victory against Afghanistan at the Dubai International Stadium on Thursday evening.

Kohli’s maiden T20I century though came a tad late as India bowed out of the tournament after earlier losses to Pakistan and Sri Lanka.”It was a very special day for us as a team.

We had spoken after the previous match (loss against Sri Lanka) that we need to take the field (against Afghanistan) with a positive attitude, as that will matter a lot for us.

This tournament was very important for us, definitely. We got the exposure of the knockout stages, we got exposed to pressure situations,” added Kohli.Kohli, however, said the main goal was the ICC T20 World Cup in Australia in October-November, for which the Asia Cup had given the team several learnings.

“But our goal, everyone knows, is the (T20) World Cup in Australia, and we are improving in all aspects of the game. We will learn from the matches (here) that did not go well for us,” said Kohli.

“71st hundred, the entire country was waiting. The time you have spent playing cricket, I’m sure this milestone was round the corner. I think today’s innings was special because we wanted to end the tournament on a winning note.

We saw a lot of things in your innings. You picked the gaps nicely, played some lovely shots and targeted the right bowlers,” said Sharma in a video posted on BCCI.tv.Kohli revealed the month-long break from cricket before the Asia Cup was the first time in his 13-14 years of professional career that he had not picked a cricket bat.

“Since the time I’ve come back to the side after the break… after 13-14 years, for the first time I did not touch the bat. A lot of things came into perspective,” said Kohli, adding that support from the team played a huge role in his strong comeback.

“The support from you people (team), management… the communication was crystal clear that ‘muhje khelne do’ (let me play)… let me bat. I think that was very important for me because the space you all (teammates) gave me, it made me feel quite relaxed in this entire phase.

And, when I returned (from the break), I was excited as to how I can contribute to the team,” said Kohli.Kolhi said he had to play the innings he played against Afghanistan in order to contribute more to the team’s cause.

The 33-year-old smashed an unbeaten 122 off 61 deliveries against Afghanistan on Thursday.”I had to play this kind of an innings as the (T20) World Cup is ahead of us. If I play well, I can contribute more to the team. 3-4 days back Rahul (Dravid) bhai has spoken to me on batting first and how to optimally utilised the middle-overs phase… how I can improve my strike rate.

My only goal was that all those things I needed to improve from the perspective f the team, I will come and try in the Asia Cup,” added Kohli.Kohli said he was pleasantly surprised, in fact shocked, after scoring his maiden T20I ton first following the enforced break.

“I didn’t really expect (it). I was in fact shocked like many of you… that I would score a century in this format of the game first after such a long time. But I was pleasantly surprised, and I’m very grateful and honoured right now,” added Kohli.

Even when Virat Kohli was passing through a lean phase, his contribution was phenomenal : KL Rahul