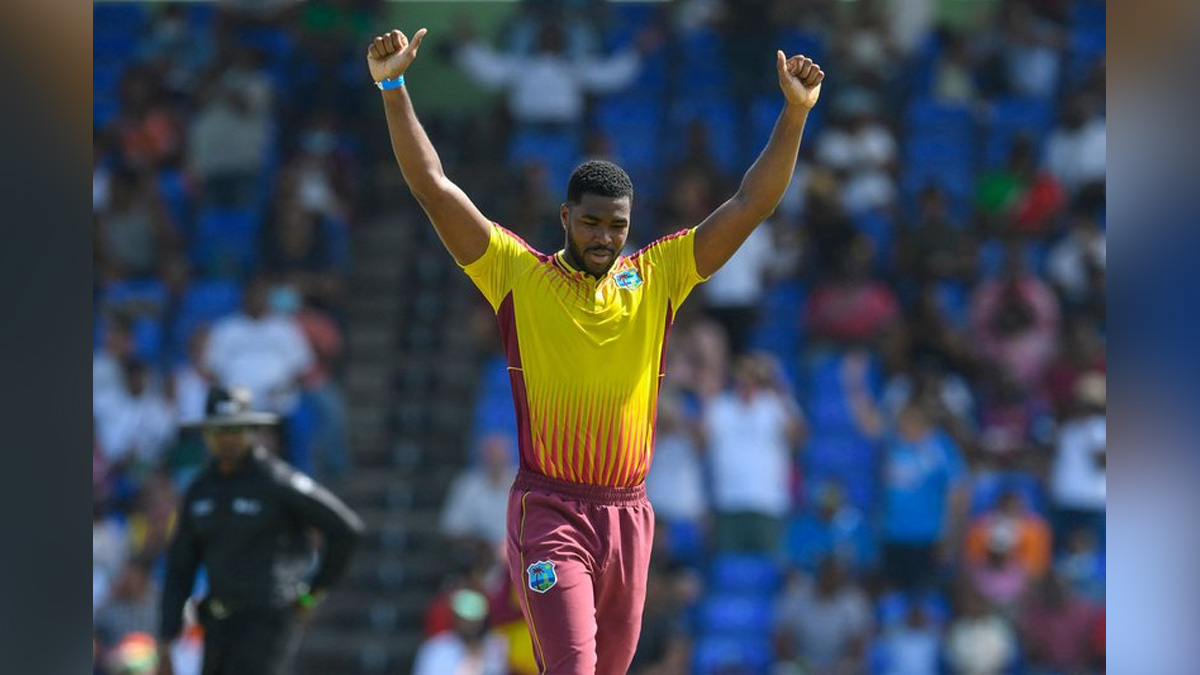 Basseterre (St Kitts) : West Indies left-arm pace bowler Obed McCoy produced one of the most impactful bowling performances in T20 International cricket history as he demolished India for 138 to guide the hosts to a series-levelling five-wicket win at the Warner Park on Tuesday (IST).

The 25-year-old quick, egged on by a raucous crowd, produced the best-ever figures by a West Indies bowler in the shortest format before the home side held its nerve in the final over to level the five-match series at 1-1.

McCoy ended with 6/17 from a brilliant four-over spell which was a mix of accurate cutters and changes of pace.Opener Brandon King then top-scored with 68 (52 deliveries) to inspire a successful West Indies chase.

Devon Thomas arrived at the back end and demonstrated his maturity and skills with a crucial unbeaten 31 off 19 balls which included a six and a four to take West Indies home in the final over.

With West Indies requiring 10 runs from the last over, Thomas cleared the ropes at extra cover with the first legitimate delivery of the over from seamer Avesh Khan before slashing the next ball to the backward point boundary.

“It’s a great feeling. I’ve been working really hard and to be able to perform against a top side like India, is a great, great feeling,” said McCoy, who was adjudged ‘Player of the Match’.

“I think when you’re bowling you’ve got to have a clear mind, you go with your plans and you assess the conditions the ground, the wind, everything and you just bowl accordingly.

“It was just the fifth time a West Indies player has taken five wickets or more in a Men’s T20I, with McCoy joining the likes of Keemo Paul (5/15 against Bangladesh), Daren Sammy (5/26 against Zimbabwe), Jason Holder (5/27 against England) and Oshane Thomas (5/28 against Sri Lanka) and then going one better than the previous quartet by collecting a sixth wicket, according to ICC.

McCoy’s effort was also the first time any player has picked up six wickets against India in any men’s T20I, with the bowler breaking Wanindu Hasaranga’s 4/9 for Sri Lanka against India in Colombo last year.

McCoy’s victims included the likes of Rohit Sharma (0) and Ravindra Jadeja (27) among others.The tall pacer struck with the opening ball of the match when he had Sharma caught at deep gully, before Suryakumar Yadav (11) followed the India skipper back into the dressing room on the first ball of McCoy’s second over.

McCoy then returned in the 17th over to deceive Jadeja and collect his third scalp of the match. He then finished the job in his final over picking up the wickets of Dinesh Karthik (7), Ravichandran Ashwin (10) and Bhuvneshwar Kumar (1) to complete the rout.

After the superb bowling in the first half, King led West Indies’ response with the bat as he struck eight fours and a couple of massive sixes as he dominated a 46-run, opening stand with Kyle Mayers (8).

He added a further 25 for the second wicket with captain Nicholas Pooran who made 14 before holing out in the deep off off-spinner Ravichandran Ashwin.

This led to a mini-collapse as four wickets fell for 53 runs.King, who reached his fourth T20I half-century off 39 balls at the end of the 12th over, was bowled in the 16th over backing away to Avesh but Thomas held his nerve and delivered a memorable win.The third match of the series will be played later on Tuesday.
Brief scores: India 138 in 19.4 overs (Rishabh Pant 24, Hardik Pandya 31, Ravindra Jadeja 27; Obed McCoy 6/17) lost to West Indies 141/5 in 19.2 overs (Brandon King 68, Devon Thomas 31 not out) by five wickets.