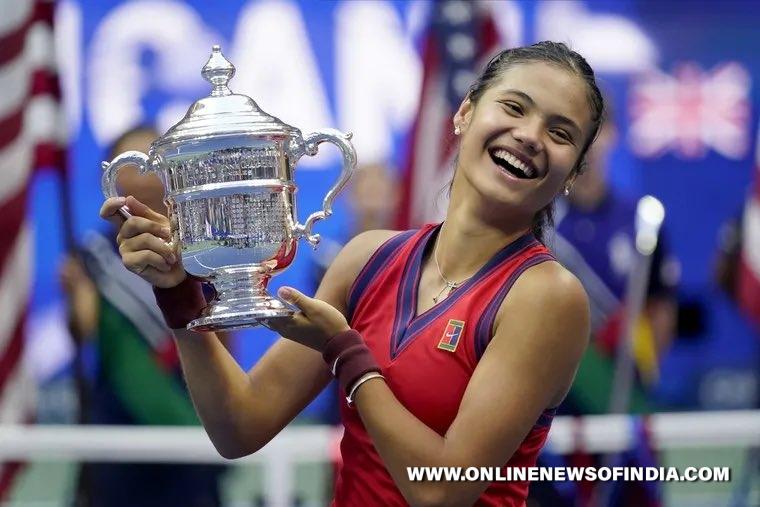 Parents played a huge part in my upbringing: US Open champ Emma Raducanu

New York : US Open champion Emma Raducanu of Great Britain said on Tuesday that the nerves of steel which she displayed during her run at Flushing Meadows over the fortnight was because of the “tough” upbringing, adding that she still has a lot of work to do to improve her game.”My parents played a huge part in my upbringing. They were pretty tough on me when I was young and it kind of shaped the way. I think now it is helping on the biggest stages in the world when you really need it,” Raducanu said on ABC show.Raducanu defeated Leylah Fernandez of Canada in an all-teen affair to lift the US Open Trophy on Sunday, becoming the first qualifier to win a major.”From a young age I’ve always been brought up to have mental strength,” adding that her Chinese mother and Romanian father were her toughest critics.”They are my toughest critics and very hard to please. But I got them with this one. It was really nice to talk to them after I won.

They were just so happy and proud of me,” said Raducanu, who jumped 127 places on the latest WTA rankings, moving from No.150 to No.23.Raducanu started the year at No.345 (as the British No.11), but her ranking has been on a rapid climb in the past three months. The teenager has won 21 of her past 25 matches. After reaching the fourth round at Wimbledon as a wildcard, Raducanu’s ranking improved from No.338 to No.179, helping her secure a spot in qualifying at the US Open.Among those who congratulated Raducanu on Instagram after her US Open title triumph were footballer David Beckham and F1 driver Lewis Hamilton. The Queen also sent her a message.”I’ve just been trying to enjoy the moment. With my team the night of the final we just had a really nice night reflecting. Everything has gone so fast. We were taking care of every single day and before you know it three weeks had gone. We just got to reflect and share a few stories and it was a really nice night to have with everyone.”Raducanu said that she needs to work a lot more to increase her physical strength to cope with the rigours of the tour.”Physically I’ve still got a lot of work to do because I’m still new to the game and haven’t had time to really develop,” she added.