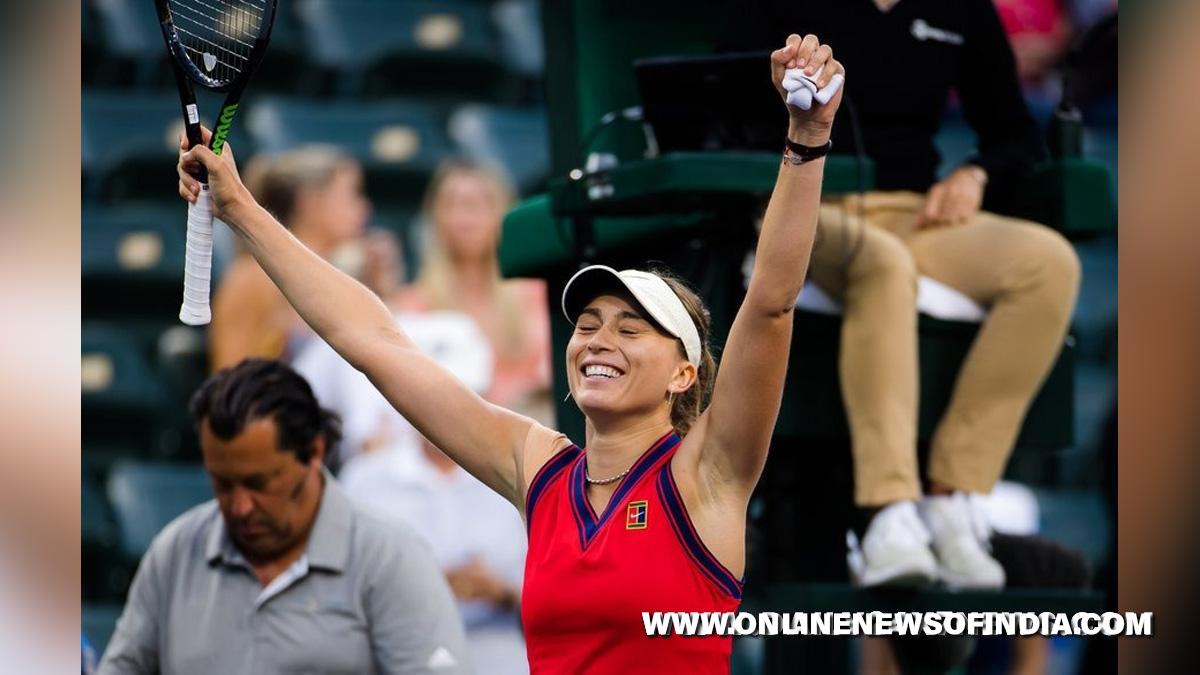 Indian Wells (USA) : Paula Badosa became the first Spanish woman since 2003 to advance to the semi-finals of the WTA event at the BNP Paribas Open, defeating 2019 finalist Angelique Kerber 6-4, 6-3 in the quarter-finals here. Badosa, seeded 21 here, will face Tunisia’s Ons Jabeur in the semi-finals, with the winner advancing to the biggest final of their careers.Indian Wells is Paula’s second WTA 1000 semi-final of the season, having advanced to the same stage at the Madrid Open in May.In the fourth round clash on Wednesday evening, Paula tallied her fourth win against a Top 10 player of what has been a breakout 2021 season, beating French Open champion Barbora Krejcikova in straight sets. Playing in her first main draw in the California desert, the 23-year-old has also tallied wins over Coco Gauff and Dayana Yastremska, losing just one set en route to her Friday showdown with Jabeur.In her first meeting against former No.1 ngelique Kerber on Thursday night, Paula continued to deploy the successful gameplan that earned her a quarter-final spot. It was Paula who was able to both minimize her unforced errors while increasing steady pressure from the baseline throughout the match to break the German five times.”She’s a really tough player,” Paula said. “She’s really tricky. Of course I’ve seen her a lot, but on court she’s really tricky, she opens the court a lot. Sometimes she plays short balls but then very long ones. She plays very tactically.”At the beginning it was strange for me. She runs a lot.

She sees all the balls where you’re going to hit. It’s quite tough for me at the beginning and at the end as well. It was a really, really tough one.”After an early exchange of breaks in the opening set, both women moved through their service games with relative ease. But serving at 4-5, 30-30, Kerber misfired on back-to-back points to hand over the set. At 30-30, the German hit her second double-fault of the set to give Badosa her second break point of the set and the Spaniard converted when Kerber sent a regulation backhand long for her 12th unforced error of the set.Paula continued the pressure on Angelique’s service games in the second set. Badosa broke twice to build a 5-2 lead, but the three-time major champion dug in her heels to save two match points to hold to 3-5 and then broke Badosa to get back on serve at 4-5.Paula steadied on to seal the set on a break of serve. After they held their pair of holds, she finally earned her third match point and crouched to the ground in celebration after Kerber sent a forehand long to end the match.In the other quarter-final, No.12 seed Ons Jabeur beat 18th-seeded Anett Kontaveit of Estonia, 7-5, 6-3, to reach the semi-finals in Indian Wells, guaranteeing herself a spot in the world’s Top 10 in Monday’s upcoming singles rankings. She will be the first Arab to ever reach the Top 10 of either the WTA or ATP singles rankings.By cracking the final four in the California desert, Ons is into the semi-finals of a WTA 1000 event for the first time in her career. Her three previous appearances in a WTA 1000 quarterfinal ended in defeat.

David Warner will be right there at the top of the order, asserts Aussie captain Finch

Played just two games as a group and we beat Bangladesh : Kyle Coetzer