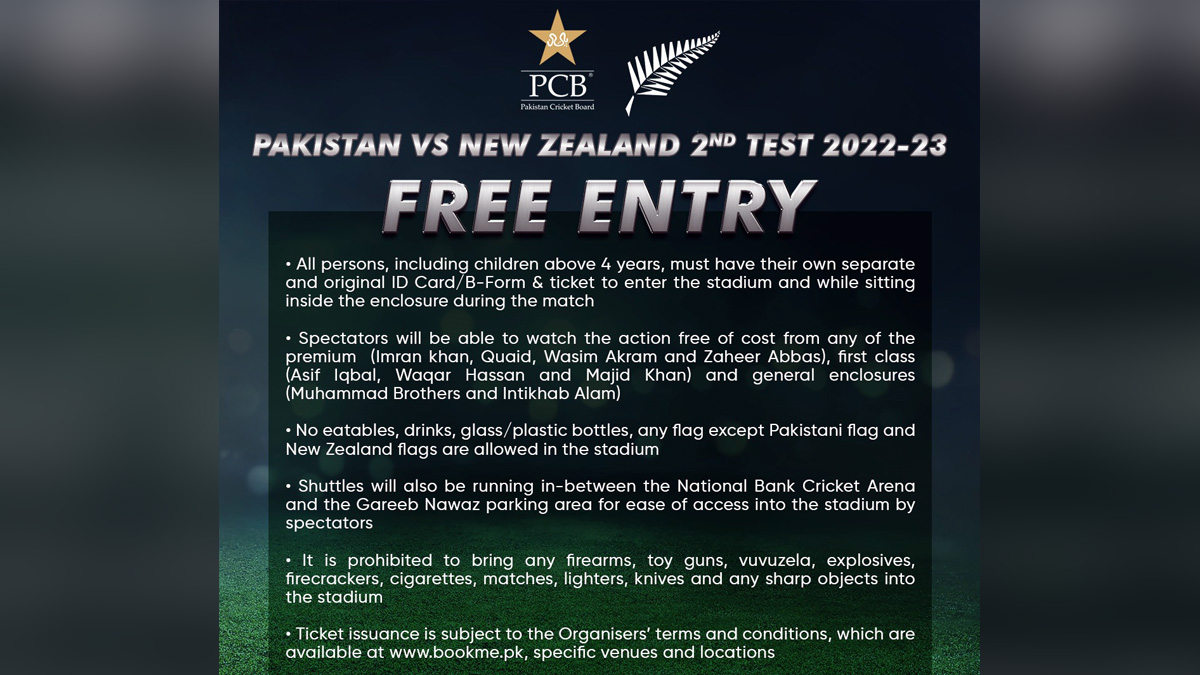 Karachi : The Pakistan Cricket Board (PCB) on Saturday announced free entry for spectators for the second Test match between Pakistan and New Zealand to be played from January 2-6 at the National Bank Cricket Arena, Karachi.

The spectators wishing to watch the Test match are only required to bring either their original CNIC or B-form to enter the stadium. They will be able to watch the action free of cost from any of the premium (Imran Khan, Quaid, Wasim Akram and Zaheer Abbas), first class (Asif Iqbal, Waqar Hassan and Majid Khan) and general enclosures (Muhammad Brothers and Intikhab Alam).

PCB added that shuttles will also be running in between the National Bank Cricket Arena and the Gareeb Nawaz parking area for ease of access to the stadium by spectators.

It added that fans are prohibited to bring any firearms, toy guns, vuvuzela, explosives, firecrackers, cigarettes, matches, lighters, knives and any sharp objects into the stadium and that all persons, including children above the 4 years, must have their own separate and original ID Card/B-Form & ticket to enter the stadium and while sitting inside the enclosure during the match.

Coming to the first Test between Pakistan and New Zealand, which ended in a draw on Friday as bad light halted the visitors’ victory bid and denied them a chance to go 1-0 up in the two-Test series.

For Pakistan, fine half-centuries by Imam-ul-Haq, Saud Shakeel and Sarfaraz Ahmed helped Pakistan to declare at 311/8 in 103.5 overs and set New Zealand a target of 138 in 15 overs for the visitors on day five.

Chasing a target of 138 after a gutsy declaration by Pakistan skipper Babar Azam, New Zealand were 61/1 in 7.3 overs with Devon Conway (18 not out) and Tom Latham (35 not out) when both the teams shook hands due to fading light, saving Pakistan from their fifth consecutive defeat in Test cricket.