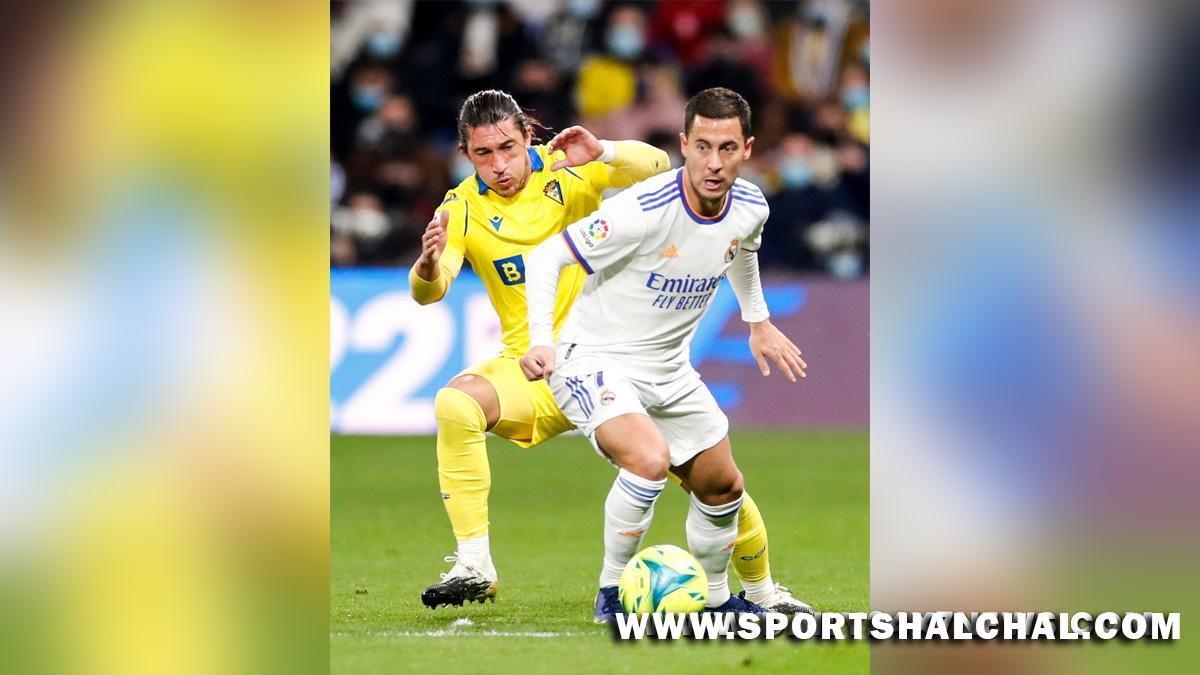 Madrid : Real Madrid were held to a 0-0 draw at home by struggling Cadiz in the surprise of the weekend in La Liga. In a late Sunday game, Real Madrid peppered the Cadiz goal with over 30 shots during the game, nine of which were on target, but they were denied by a series of fine saves from Cadiz goalkeeper Jeremias Ledesma and a dogged defensive display.Despite several cases of Covid-19 in the squad, Carlo Ancelotti fielded a strong-looking side with Marcos Asensio and Luka Modric the only regular first-team starters who were sidelined.Eden Hazard was given a rare start and produced an irregular performance, while Casemiro was lucky to stay on the pitch for a dreadful challenge on Ivi which means he will miss the visit to Bilbao on December 22.Sevilla moved to within six points of Real Madrid thanks to a late goal from Lucas Ocampos that gave them a 2-1 win at home to Atletico Madrid, Xinhua reports.

Ivan Rakitic’s powerful shot gave Sevilla and early lead, although Felipe equalised before halftime with a header from a corner.Atletico improved after the break, but when they were looking good value for a point Ocampos won the game for Sevilla with just three minutes to go.Betis remain third, but slip to four points behind their neighbours after losing a thrilling game 3-2 away to Athletic Bilbao, who ended an eight-game run without a win.The home side took a second-minute lead through Inaki Williams, but Juanmi cancelled that out five minutes later and when Nabil Fekir put Betis ahead six minutes after the break, with Betis controlling much of the ball, it looked as if the visitors were on the way to their fifth consecutive win.However, Williams’ second goal of the game, with a thumping left-foot shot in the 71st minute got Athletic level and Oscar De Marcos deflected last-minute shot won them the game.It was youth to the fore for FC Barcelona, who beat Elche 3-2 with goals from debuting B-teamer Ferran Jutgla, 17-year-old Gavi and 19-year-old Nico Gonzalez.Barca went 2-0 ahead through Ferran and Gavi but suffered their usual second-half dip and Elche drew level with two goals in two minutes from substitutes Tete Moriente and Pere Milla, before Nico’s clinical winner.

Rayo Vallecano move to fourth after an easy 2-0 win at home to Alaves thanks to first-half goals from Sergi Guardiola and Catena.Rayo have taken 25 points in their Vallecas Stadium, while the defeat ends a miserable week for Alaves, who were knocked out of the Copa del Rey by lower league Linares on December 14.Real Sociedad’s league campaign continues to fall apart as they suffered their fourth defeat in five matches in the Anoeta Stadium, going down 3-1 to Villarreal.The game was level at the break after Gerard Moreno cancelled out Alexander Isak’s opener for Real Sociedad, however, everything changed when Mikel Oyarzabal was sent off for a bad challenge on Yeremy Pino.Moreno headed Villarreal ahead from a corner in the 68th minute and Samuel Chukwueze rounded off a good day for the visitors with a goal on the break in the sixth minute of injury time.Dario Poveda’s 92nd-minute header gave Getafe a dramatic 1-0 win at home to Osasuna in a game of few chances. The win lifts Getafe out of the bottom three, with Alaves dropping into the relegation zone.Finally, 39-year-old Jorge Molina scored a hat-trick as Granada recovered from their midweek Copa del Rey defeat to fourth-tier Atletico Mancha Real with a 4-1 win at home to Mallorca.