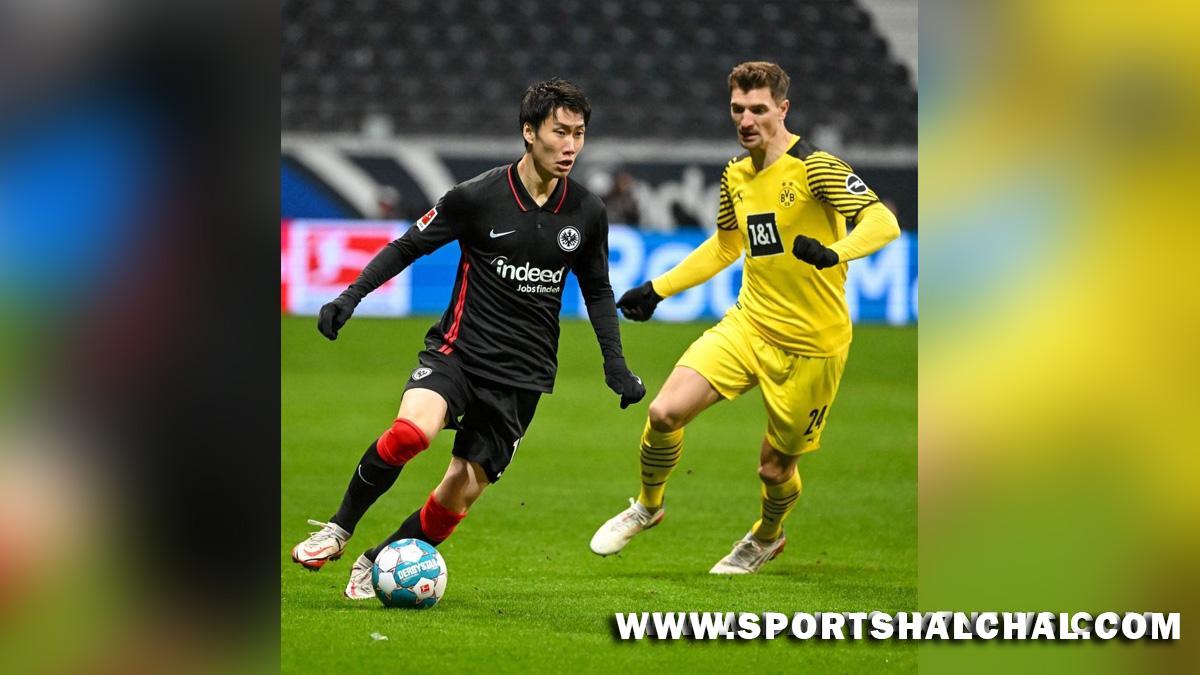 Frankfurt : Borussia Dortmund reduced Bayern Munich’s lead in the standings after rallying back from two goals down to beat passive Eintracht Frankfurt 3-2 in the 18th round of Bundesliga here.The “BVB” started powerful into the encounter as Frankfurt goalkeeper Kevin Trapp had to tip Thomas Meunier’s dangerous shot around the far post in the second minute before Erling Haaland headed into the arms of Trapp two minutes later.Frankfurt couldn’t gain a foothold into the clash but it was still the “Eagles” who broke the deadlock against the flow of the game as Filip Kostic’s free kick into the box allowed Rafael Santos Borre to stun Dortmund goalkeeper Gregor Kobel in the 15th minute.

Dortmund were shocked and things went from bad to worse as Frankfurt made it two after Borre dispossessed Marco Reus inside the box before slotting his brace past Kobel with 24 minutes gone, Xinhua reports. The hosts should have made it three at the half hour mark but for all that Jesper Lindstrom hit only the side netting following a counterattack.Dortmund showed a sign of life in the closing stages of the first half as Donyell Malen rattled the woodwork following a rebound from very close range. Frankfurt started brightly into the second half, but Lindstrom couldn’t triple the lead with only Kobel to beat from inside the box.As the match progressed, Frankfurt handed over control, allowing Dortmund to halve the deficit in the 71st minute when Haaland set up for Thorgan Hazard, who made no mistake from the edge of the area.

Marco Rose’s men pressed frenetically and levelled the score through Jude Bellingham in the 87th minute before Mahmoud Dahoud utilized a rebound to slot home the decider in the 89th minute.”We didn’t put the result beyond doubt and retracted with the lead. Dortmund gained momentum and punished us for our passiveness,” Frankfurt’s head coach Oliver Glasner said.Elsewhere, Hoffenheim bounced back against Augsburg and secured a 3-1 win to capture the third spot in the table. Leipzig crushed Mainz 4-1 by courtesy of Andre Silva’s brace. Freiburg was held to a two-all draw by bottom side Arminia Bielefeld. Bayer Leverkusen shared the spoils with Union Berlin following a 2-2 game and newly promoted Greuther Furth played out a goalless draw with Stuttgart.