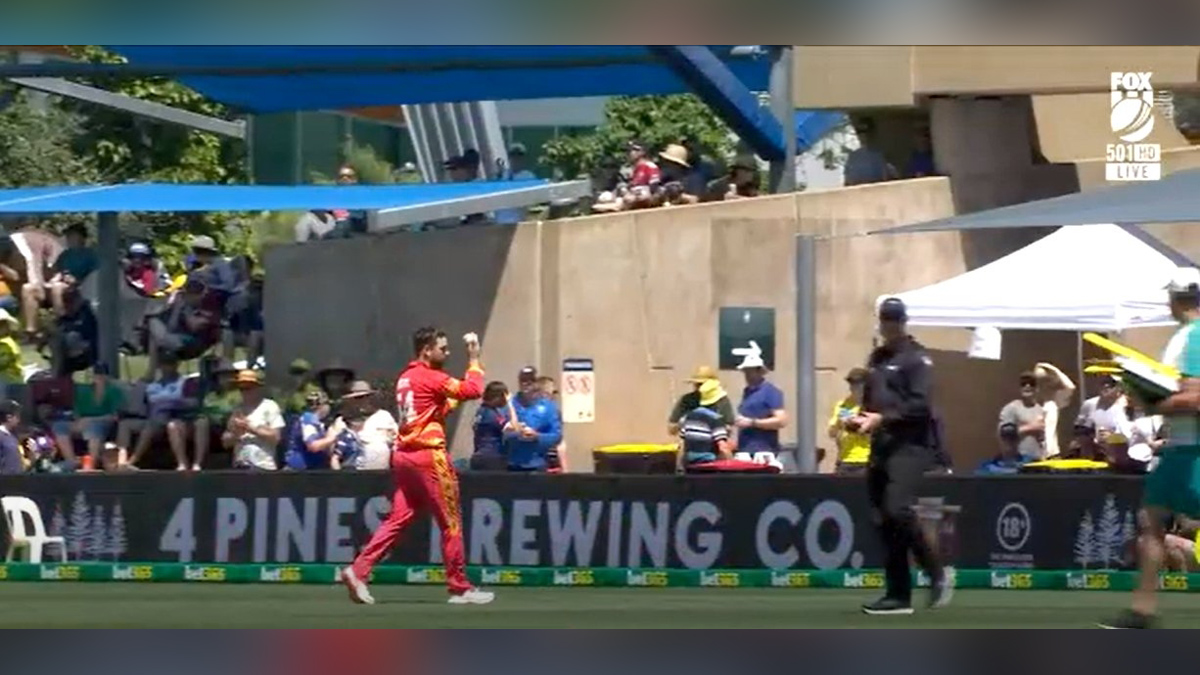 Townsville : Zimbabwe scored a historic three-wicket victory against the Aaron Finch-led Australia, with leg-spinner Ryan Burl grabbing five wickets for just 10 runs as he brought the hosts to their knees in the third and final One-day International here on Saturday.

Though Australia clinched the series 2-1, it was the manner in which the hosts capitulated which stood out, with nine of their batters scoring in single digit. Opener David Warner, with his patient 96-ball 94, helped the hosts to 141 before they were bundled out in 31 overs.

In reply, Zimbabwe notched up the required runs for the loss of seven wickets in 39 overs to record a memorable win.Australia had a forgettable start with the bat, as they were reduced to 72/5 after only 18 overs.

Put in to bat first, Zimbabwe made full use of the conditions on offer here.Richard Ngarava and Victor Nyauchi sent Finch and Steve Smith packing for 5 and 1 respectively.

Brad Evans then inflicted a double-strike, sending Alex Carey (4) and Marcus Stoinis (3) back into the dressing room. Cameron Green departed soon to Sean Williams for 3 as half the Australian side was back in the hut before the 20th over.

David Warner could only watch from the other end, as wickets fell at regular intervals and the Burl show started.Warner brought up his 26th ODI half-century, mixing caution with aggression.

But he was hapless as Burl cleaned up the Australia lineup from the other end.Glenn Maxwell (19) and Ashton Agar (0) were his first two victims. Warner finally ran out of patience, as Burl accounted for his wicket after a workman-like 94.

Burl then dismissed the remainder of the tail including Mitchell Starc (2) and Josh Hazlewood (0) as Australia were bowled out for 141.Burl ended his spell with figures of 5/10, according to ICC.

Zimbabwe had a decent partnership at the top, with Takudzwanashe Kaitano and Tadiwanashe Marumani giving them a 38-run opening stand.But after Kaitano was dismissed on 19 by Hazlewood, the visitors would have to endure some jitters.

Hazlewood then sent Wessly Madhevere (2) and Sean Williams packing on back-to-back deliveries to further increase the tension in the Zimbabwe camp.

Sikandar Raza (8) also could not contribute much and Marumani’s dismissal for 35 by Green had the visitors reeling at 77/5.A vital stand of 38 between skipper Regis Chakabva and Tony Munyonga then calmed some nerves.

The duo batted patiently, taking their time, while not taking unnecessary risks.Their stand took Zimbabwe to 115, when left-arm spinner Ashton Agar bowled Munyonga for 17, with the visitors still needing 17 more to win.

Chakabva, joined by Burl, then guided Zimbabwe to a famous win.Chakabva played a captain’s knock of 37 not out while Burl scored 11.Starc claimed his 200th ODI wicket as he dismissed Burl late in the innings but Zimbabwe held their nerves to win the match by three wickets, with Brad Evans smashing home the winning runs.

It was Zimbabwe’s third win against Australia in 33 attempts and their first since 2014 in Harare. This was also the first time they have defeated Australia in Australia in ODI cricket.