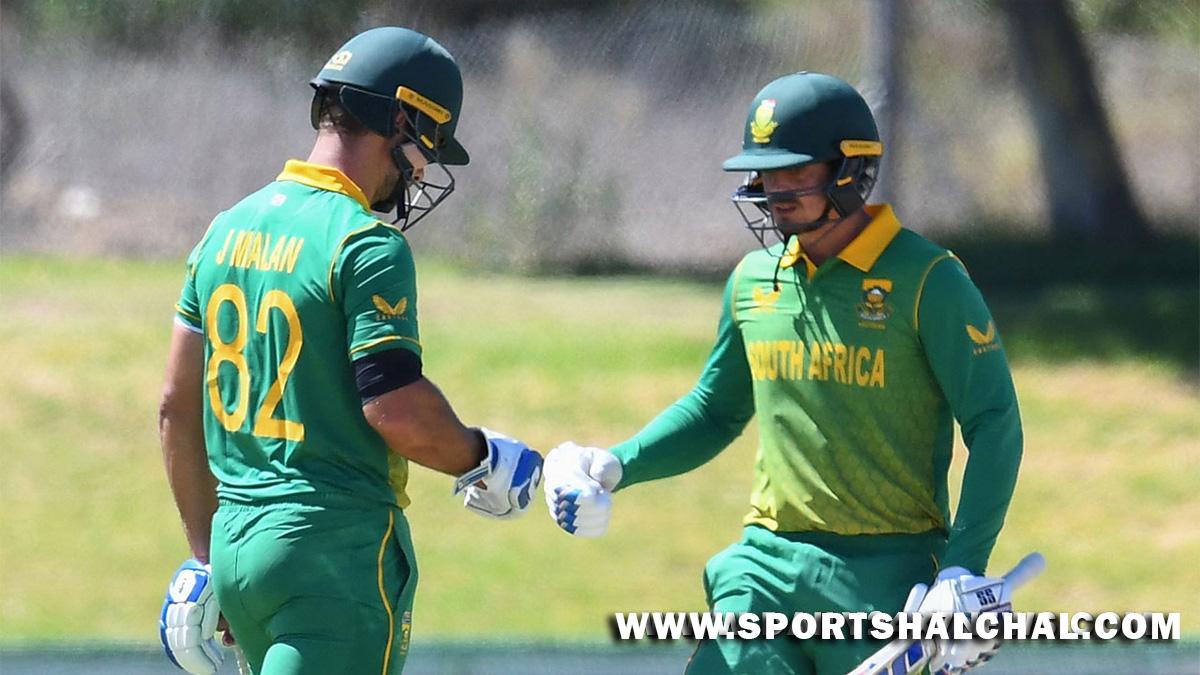 SA v IND: De Kock is one of the best batters in the world when he gets going : Janneman Malan

Paarl : South Africa opener Janneman Malan heaped praise on fellow opener Quinton de Kock, saying the wicket-keeper is one of the best batters in the world when he gets going. In South Africa’s seven-wicket win over India in the second ODI at Paarl, Malan and de Kock put up a stand of 132 runs to set the base for a successful chase of 288 and take an unassailable lead in the three-match series.While Malan top-scored with 91, de Kock was the blazing aggressor with 78 off just 66 balls laced with seven fours and three sixes, eventually taking ‘Player of the Match’ award.”Quinny made it easy for me at the start. I just tried to give him as much strike as possible because I just wanted to let him go do his thing. He played a couple of ridiculous shots, which are good signs. He is one of the best batters in the world when he gets going, so it was good to bat with him,” said Malan in virtual press conference.Malan was content with South Africa’s batting performances in the second ODI after winning the series opener by 31 runs on Wednesday.

“We were happy to have two hundreds in the previous game, and maybe we could have had me or Quinny getting to a hundred here, but I’m very proud of the partnerships we had. We had a 100 partnership and two 50 partnerships, which means the batters are coming in with good plans and good intent and building nice partnerships to make it easier for each other.”Talking about where South Africa did better than India in the ODIs, Malan pointed towards handling Indian spinners better and striking at regular intervals.”I think what worked for us is when we look at the moments in the game. We have handled their total overs of spin better than they have handled our overs of spin, and that has been a big confidence boost for us as our spinners have been better.”Then, building partnerships and working hard for every run. As a bowling unit, we did well to keep getting a wicket. They had a chance to get a big score today (Friday) but we kept getting wickets and couldn’t get too much in the end as we kept breaking their momentum. The partnerships we built and the way batters batted gave us the edge.”

The 25-year-old brushed aside the talk of South Africa being distracted on head coach Mark Boucher facing disciplinary hearing on charges of gross misconduct after being accused of racism during the findings coming from Social Justice and Nation-Building (SJN) report.”I don’t want to sound ignorant or uninterested but it’s a big series we have in front of us. We can’t have many distractions in terms of personal mindsets. I just try and focus on the game, focus on getting the team in winning positions and playing for everyone in the team and the country.”With the weather touching 41 degrees and scorching heat at the Boland Park, playing on the field was tough. Malan signed off by saying he was glad the strength and conditioning work helped in dealing with very hot weather.”It was way hotter than in the first ODI and it was always going to be a challenge for the body, but that’s what we work on our conditioning for. I feel critical but stable. It’s always a challenge for the body to field and bat in conditions like these, but that’s what we work for and do conditioning for. I’m glad we could meet that challenge.”