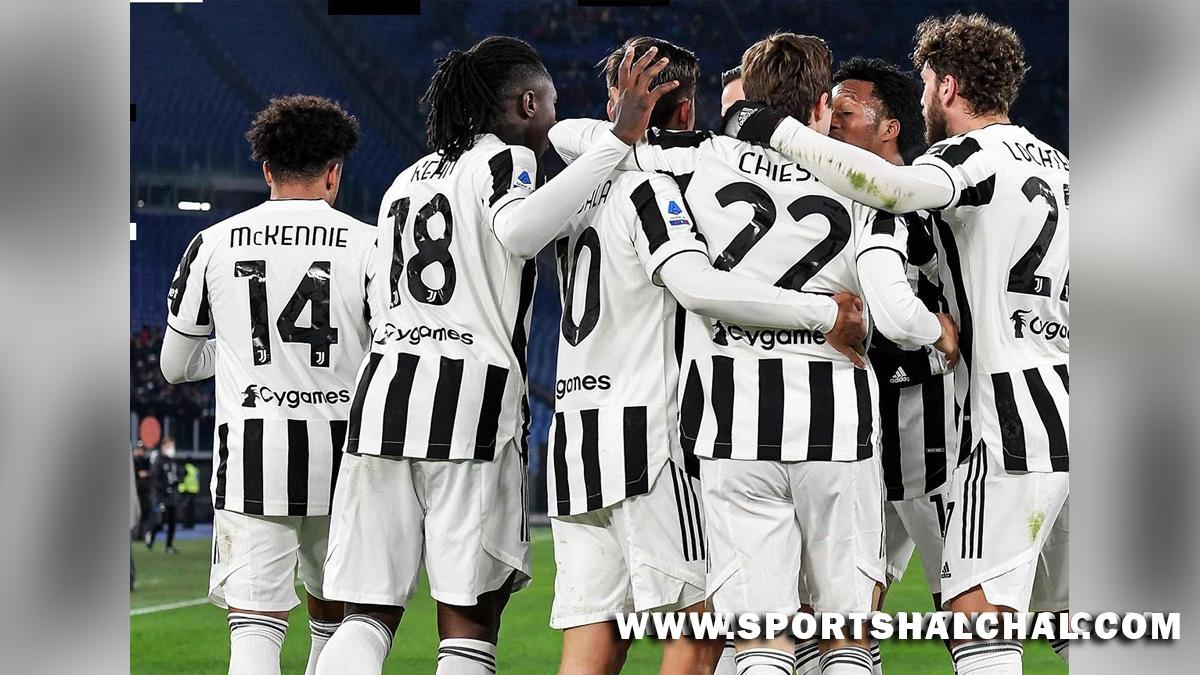 Rome : Despite Matthijs De Ligt’s red card, Juventus fought back from 3-1 down to overturn Roma in a topsy-turvy 4-3 thriller, with Wojciech Szczesny making a result-saving save to deny a penalty.Juventus opened the new year with a 1-1 tie with Napoli, and it had Giorgio Chiellini back to the squad in Sunday’s game after he recovered from Covid-19. Roma had to play without injured Leonardo Spinazzola and Stephan El Shaarawy, while Rick Karsdorp and Gianluca Mancini were suspended.Roma went ahead in the 11th minute when Jordan Veretout’s corner found Tammy Abraham for a twisting header. It sparked a controversy in the 13th minute as Lorenzo Pellegrini’s attempt in the box struck De Ligt’s hand, but the referee waved play on, reports Xinhua.

The away side got back on level terms minutes later, as Paulo Dybala collected the ball on the edge of the box, before finishing with a trademark left-footed curler.
Juventus was forced to make a change in the 30th minute when Federico Chiesa limped off with an injury after a collision with Chris Smalling, making way for Dejan Kulusevski.The Giallorossi restored the lead straight after the break, as Henrikh Mkhitaryan’s rocket took a huge deflection off Mattia De Sciglio to loop over Szczesny before Pellegrini added another with a stunning free-kick.However, Juventus turned around the game just in a matter of minutes, as Manuel Locatelli’s header and Kulusevski’s deflected strike helped the Bianconeri to equalize before De Sciglio atoned for his error by sweeping it in.It was not finished yet, De Ligt was sent off in the 81st minute after his second yellow card for a handball in the box, but Szczesny played heroics to parry Pellegrini’s spot-kick.

With the win, Juventus still ranks fifth with 38 points, three points behind Atalanta who destroyed Udinese 6-2 on Sunday and has a game in hand.Inter Milan took revenge on Lazio by defeating the Biancocelesti 2-1, claiming the opening win in 2022 after its away fixture against Bologna was postponed due to COVID-19.Alessandro Bastoni’s stunner out of the box gave the Nerazzurri a 1-0 lead, before Lazio’s hitman Ciro Immobile scored the equalizer, but it was Bastoni’s night as his assist for Milan Skriniar helped Inter seal the win.Inter Milan continued leading the table with 49 points, one point ahead of AC Milan who beat Venezia 3-0 away, thanks to Theo Hernandez’s double on top of Zlatan Ibrahimovic’s opener.Also on Sunday, Napoli beat Sampdoria 1-0 on Andrea Petagna’s winner, Sassuolo sailed away with a 5-1 victory against Empoli, Spezia narrowed past Genoa 1-0, Salernita won Hellas Verona 2-1 away.