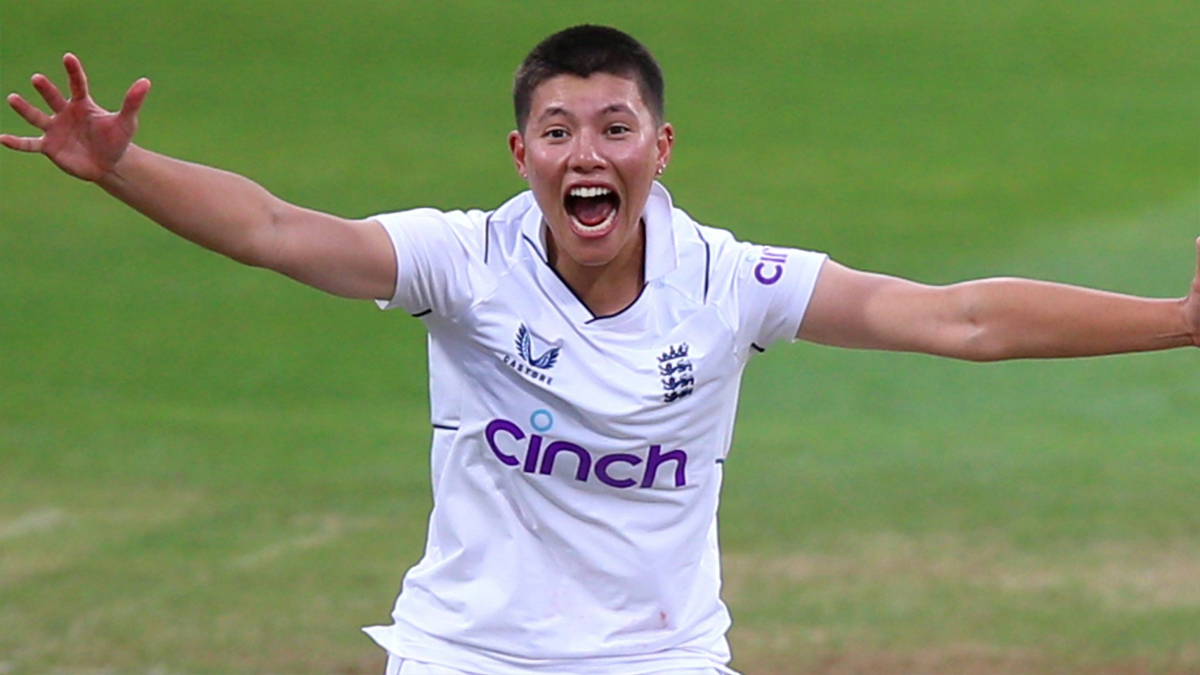 New Delhi : The English cricket summer of 2022 has been a memorable one for young pacer Issy Wong. She made her debut in all three formats of the game in the all-format series against South Africa at home.

But it was in her Test debut at Taunton where Issy sparkled the brightest, picking three wickets, including castling Laura Wolvaardt, one of the best batters in the cricketing circuit, which stood out the most.

Bowling fast has been a constant dominator in Issy’s life, something which she admits is in her nature. Called ‘Human Hurricane’ by her mother for doing everything at 100 miles an hour, Issy prefers bowling faster due to lots of hard work put into it over solving a rubik’s cube in just 33 seconds.

In a virtual interaction facilitated by the Sony Sports Network, IANS caught up with Issy, who is a part of England’s T20I side for the upcoming three-match series against India, where she spoke about all things fast bowling, Test debut, looking up to veteran fast bowler Katherine Brunt, prospect of a World Test Championship in women’s cricket and much more.

Excerpts from the interaction:

Q: Let’s start with your Test debut at Taunton. How was the experience of debuting in the international arena through Test cricket?

A: It was kind of amazing. I wasn’t really expecting it so soon. I guess the way things panned out was pretty special for me. It was my first taste of international cricket. So, it is probably something which will stay with me for a long time.

It was a Test match and we don’t get to play too many Test matches. So, I think just how much special it was for me and hopefully, get a chance to put on the whites soon.

Q: Has the standard of international cricket surprised you? How do you think you have fared at this level till now?

A: I was reasonably prepared going into it on the back of playing in franchise competitions like The Hundred, WBBL. A lot of these players currently, I have played against them before. I guess it kind of made it easier and the beauty of competitions like that is you can play against the best without necessarily playing international cricket.

Q: What is the ultimate joy for you in fast bowling?

A: This is hard work, isn’t it? But that half a second just after getting a wicket or even taking a catch after being hit for a boundary, that’s pretty cool. Especially with bowling I guess, because you are kind of up for it.

You will just bowl, bowl and bowl; some day you bowl 10 overs for absolutely nothing. Then, you get that reward at the end of it, well that’s very rewarding I guess.

Q: How much of a high it is to know that a batter at the crease could be afraid of the speed you would be bowling at?

A: I guess you hope so; that’s part of it, isn’t it? All of it kind of adds into what you can do. I guess if you build that up, it actually makes bowling maybe a little bit easier, the nice bits. I love the whole kind of nature of bowling and bowling faster and everything which comes with it.

Q: How much of an importance stamina has for a fast bowler to generate speed?

A: Yes, stamina is really important and you got to be able to repeat it. Actually, (it’s important for) having the strength to kind of guess do the fast ones. A lot goes into saying that I could bowl 10 overs and all will be the same; the same speed and same level.

But I would also need to recover well as well. You many not be bowling a longer spell but you might be bowling three or four really short spells and be able to make sure in those shorter spells that you can really produce what you need to and if it provides a bit of impetus, so be it.

Q: A lot of the talk has been around the 80mph barrier which you are widely tipped to break. Do you take any sort of pressure about this or go with the flow?

A: Very much, I would go with the flow. I don’t think about it at all. Everybody thinks that I fret about it, which is not the case. It’s going to happen at some stage, with just the way the game is going.

There’s very few people bowling rockets in the world; Shabnim Ismail was bowling very quick when she was over here. Maybe it would be her, but we will see. But I stand by my original statement: is it possible? Absolutely yeah.

Q: Katherine Brunt has been someone who you have adored since your growing up years. Then, this year, she presented you your England Test cap. How was it to get your Test cap from a player who’s also your idol.

A: Watched Katherine as soon as I was into cricket. She was there and is just an amazing athlete as well as an amazing ambassador for the sport for just everything she’s managed to achieve in such a long career.

She’s still at the top of her game and in my opinion, on top of world cricket with what she’s doing.She’s definitely someone I looked up to in terms of not just the skill, but I guess in the way she goes around the game as well.

I don’t think it gets much better than actually it was. It was nice and quite an emotional moment for both of us. It was really nice to share that. You get your first one only once and it was really nice that she could do it, to give the cap.

Q: With Brunt rested from T20Is against India and Anya Shrubsole retiring from international cricket, it has opened spots for young pacers like you, Freya Kemp, Lauren Bell and Emily Arlott. In context of this, is this the best time for a young girl to be a fast bowler in England?

A: I think so. It’s really exciting, isn’t it? We are a young group which has spent a lot of time together. Me and Kempy (Freya Kemp) were obviously together in the Vipers and Brave, then I went to Phoenix and Sparks alongside Emmy (Emily Arlott).

I can speak for me that we got to training every day and work together in the gym.We are always egging on each other over (many) kinds of things and stuff, which is pretty nice. With those relationships, it’s really exciting to be a part of that group.

I am coming on this journey of starting in international cricket. Me and Belly (Lauren Bell) debuted in Tests and ODIs together and have known each other for years. To be able to share that was very special.

Q: How long did it take for you to put the setback of missing a medal in Birmingham Commonwealth Games behind you?

A: We had a pretty quick turnaround. We obviously had four-five days off and for me, it was about getting back and spending time with the family. I have a little cat as well, so spent a bit of time with her.

Just was able to put that out of mind a little bit and then, there was a change of environment with Phoenix girls, who were all fresh faced as they had a bit of time off the field.

It was quite refreshing to go in with a different group of girls, coaches and similar surroundings in Edgbaston. But it was a different format, so it felt Commonwealth was a long time away now.

Q: What are the things to make improvements in your game during the upcoming series against India?

A: I need to be more consistent at the top; if I find my length, then I can be there. It will be a challenge for all of us young seamers without Katherine there. She’s been a massive source of knowledge for us, whether it’s about saying ‘I think I should bowl this, but I am not sure of this’.

She would then say, ‘this is what you need to do and this is what’s working’. I guess this is now the next step for us, to work it out ourselves. It will be exciting to come to that.

A: I think somewhere down the line, it will be really good. We do love playing Test cricket. For us, it’s like a dream come true. It’s a shame that we get to do it once every six months or 12 months. So, I would love to see that. In order for that to happen, there needs to be a lot more red-ball cricket because playing Test matches is great.

The first time I bowled with a Dukes ball was a week before my Test debut. I just hope it goes that way as we love playing Test cricket and if we get some red-ball games, we can kind of hone those skills and make a competition for those spots in that squad because everyone would want to compete in.

Q: In February next year, there is Women’s T20 World Cup in South Africa. Is making the England squad for the same a target?

A: Definitely. Everybody wants to represent their country in all of the events, like the World Cups, the Commonwealth Games we just had, are the ones you look at and think ‘let’s put the work in and try to get that’.

The England vs India Women’s series will be broadcast on Sony Sports Network’s Ten 1 and Ten 1 HD channels from September 10.