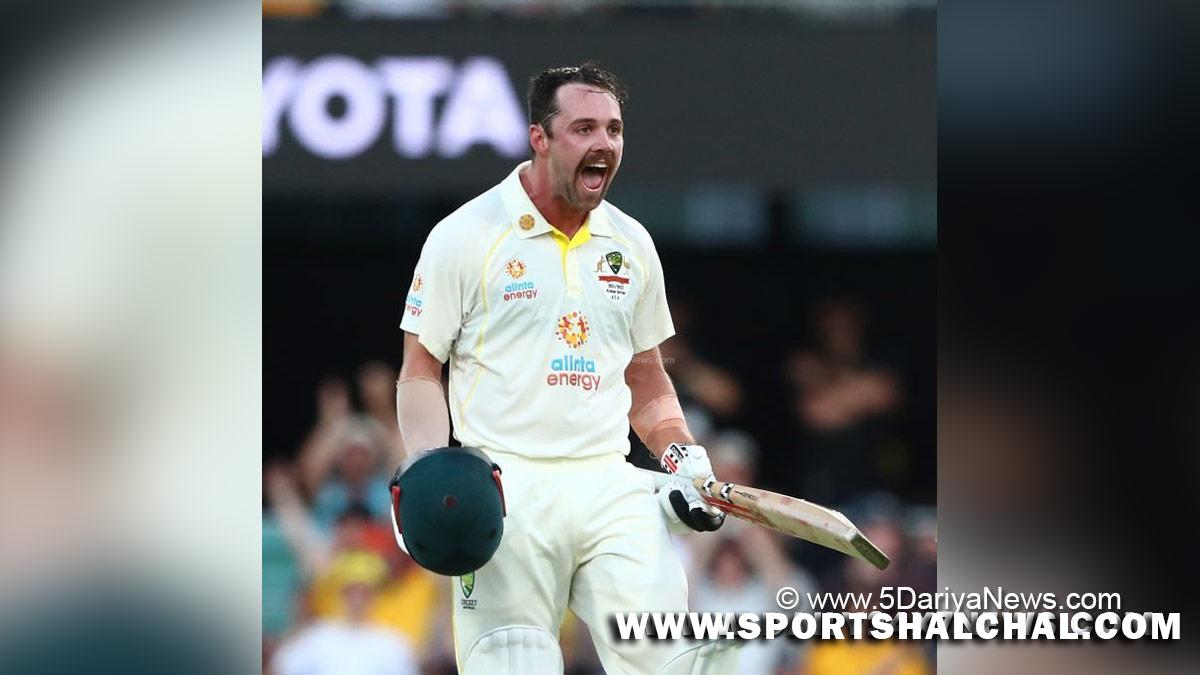 Brisbane : Australia batter Travis Head’s rollicking unbeaten century in the final session of Day Two of the first Ashes Test and a 94 by opener David Warner has put Australia in a position of ascendancy here. At stumps, Australia are 343/7 in 84 overs and lead by 196 runs with Head (112 not out) and Mitchell Starc (10 not out) at the crease. It was a day of Test cricket when Australia made the most of their chances while England were left to rue the opportunities they missed on the field.Starting from 193/3 at tea, England found instant joy as Warner fell six short of his 25th Test century, dismissed in the second over of the session for 94. Warner was deceived by a slower delivery from Ollie Robinson, which he chipped straight to Ben Stokes at cover. On the very next delivery, Cameron Green shouldered arms to an incoming delivery from Robinson and was dismissed for a first-ball duck.Amidst all this, Head stood tall to take Australia out of troubled waters despite being hit hard on the arm by Mark Wood’s pace. Though England took out Alex Carey and captain Pat Cummins, Head continued to remain solid, reaching his half-century at run-a-ball pace. The left-hander then proceeded to attack Jack Leach for three boundaries followed that by taking back-to-back fours off Stokes.As England’s strike bowlers were taken off, Head cashed on scoring chances with the old ball before reaching his first Ashes hundred with a drive past mid-on off Chris Woakes on the second delivery of the new ball. Head’s late onslaught saw him become the third-fastest century scorer in the history of the Ashes, after Adam Gilchrist in 2006 and Gilbert Jessop in 1902.

Head’s efforts came after Warner and Marnus Labuschagne guided Australia into the lead despite the hosts being rocked early. Under a clear sky and bright sunshine, Ollie Robinson struck the first blow to Australia by dismissing Marcus Harris, who pushed with hard hands to be caught by Dawid Malan at third slip. The defining moment of the first session came when Ben Stokes bowled Warner on 17 with an inswinger off his fourth ball, only for the replays to show that it was a no-ball.From that moment onwards, England were made to toil hard as Warner and Labuschagne went about their business of scoring runs with edges falling short of the slip cordon. The duo went after Leach, who gave away just one run from his first over, amassing 30 runs off his next two overs. Warner hit him for two sixes in the 27th over. Labuschagne too hit Leach for a four and six before reaching his half-century with a cut through backward point off Chris Woakes in the next over.Post lunch, Warner continued to ride on his good fortune as he was dropped in the first over after lunch by Rory Burns at second slip. Five overs later, Warner survived again on 60 as he slipped after trying to glance and Haseeb Hameed, at short leg, missed the run-out chance. The two missed chances helped Australia massively as Warner and Labuschagne registered the hosts into taking the lead while putting up a stand of 156 runs for the second wicket.The breakthrough was provided by left-arm spinner Jack Leach, who after being lofted for a six on the previous ball, forced Labuschagne to go for the cut on a short ball with extra bounce. The right-hander failed to keep the cut-down, slicing straight to backward point.Five overs later, Mark Wood was rewarded for his persistence as Steve Smith nicked behind to keeper Jos Buttler. Though Robinson would take two more post-tea, Head, through his counter-attacking knock, ensured that England’s comeback ambitions were put to rest.
Brief scores: Australia 343/2 in 84 overs (Travis head 112 not out, David Warner 94, Ollie Robinson 3/48, Joe Root 1/29) against England, lead by 196 runs