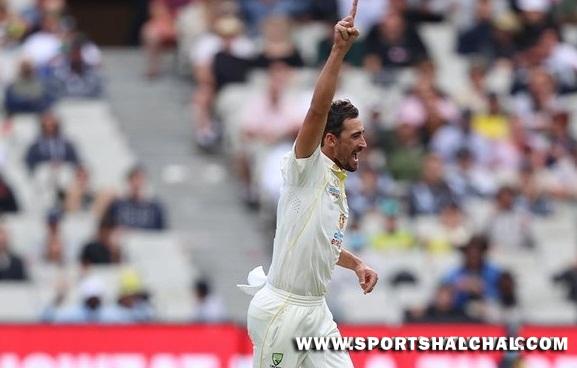 Melbourne : On a dramatic day when the England cricket team was in the midst of a huge COVID-19 scare, Australian pace bowlers Mitchell Starc and Scott Boland produced a superb spell in the final hour of play on Day 2 here, leaving England teetering at 31/4, still trailing by 51 runs.After a delayed start to proceedings at the MCG following a COVID-19 scare — two members in the England support staff and two of their family members tested positive for the virus –, Australia fought back in the morning session as they first crossed England’s score of 185 midway through the second session and then took a handy 82-run first-innings lead, putting 267 on the board in 87.5 overs.Nightwatchman Nathan Lyon played a knock of 10 before driving at a wide one from Ollie Robinson to edge it to Jos Buttler. Marcus Harris was looking steady at the crease and was joined by the new No.1 batter in the Test rankings, Marnus Labuschagne.Mark Wood bowled a superb delivery to send the in-form Labuschagne back to the pavilion. Bowling short of a length, the ball nipped away and the extra pace did the trick as the Australian batter could only edge it to Joe Root in the slips. England sensed a glimmer of hope with two early strikes.

The tourists kept up the pressure and it fetched them the wicket of Steve Smith. Batting on 16, Jimmy Anderson bowled a delivery which moved back in, took the inside edge and rattled the stumps.Fighting for survival in the remainder of the session Harris and Travis Head dug in and took the hosts to lunch trailing England by 54 runs. The duo countered the quality bowling for nearly 30 minutes of the second session before England struck back. Harris got to his half-century, his first of the series and third of his Test career, as the stadium erupted with applause.Head could not resist a poke against Ollie Robinson and it cost him his wicket on 27 with Joe Root taking an easy catch.Anderson then set Harris up. The 39-year-old pace-bowling stalwart got one to veer away from Harris (76) late, which caught the edge with Root taking the catch.Cameron Green and Alex Carey saw Australia through to tea with the lead standing at 15 runs. The pair fell in relatively quick succession in the final session with Green the first one to depart for 17. Carey then followed for 19, attempting a wide slash against Ben Stokes with Jos Buttler accepting an easy catch.The Australian tail then frustrated the tourists with captain Pat Cummins and Starc building a 34-run stand, before Starc and Scott Boland came together and added another 14 invaluable runs to give the hosts an 82-run lead.

English batters, after the trauma of the early-morning COVID scare, could not survive the Australian pace onslaught in the final hour of play. Starc got the ball to move sharply away from opener Zak Crawley who got a thick edge onto it and was back in the dressing room for 5.Starc then trapped Dawid Malan in front of the stumps. The No.3 batter was given out by the on-field umpire. Malan unsuccessfully reviewed the call and was gone for a duck. Starc almost got the hat-trick bowling a fine delivery which shaped away to Root who managed to survive.Opener Haseeb Hameed too walked back for 7 as a change of bowling did the trick. A good-length ball from Test debutant Boland nipped off the seam and took a faint edge off Hameed’s bat. The 30-year-old’s incredible over continued as he bowled Jack Leach for a duck, leaving the visitors in disarray at the end of Day 2.Root and Ben Stokes managed to survive the final over by Cummins but Australia would be looking to take the remaining six wickets in the opening session on Day 3.
Brief scores: England 185 and 31/4 in 12 overs (Mitchell Starc 2/11, Sott Boland 2/1) vs Australia 267 in 87.5 overs (Marcus Harris 76, David Warner 38, Mitchell Starc 24 not out; James Anderson 4/33, Ollie Robinson 2/64, Mark Wood 2/71).

I think it’s the right way to go: Ravi Shastri on split captaincy