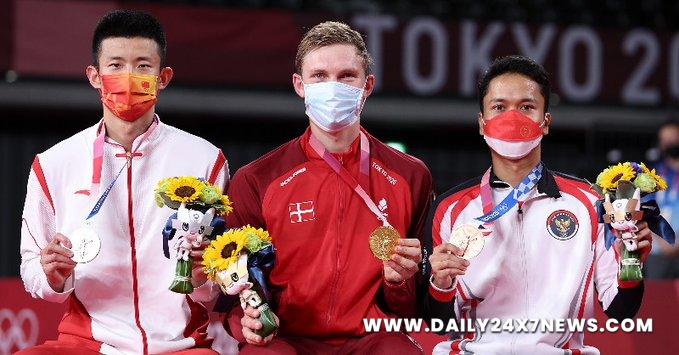 Tokyo : Denmark’s world No. 2 Victor Axelsen outclassed China’s defending champion Chen Long 21-15, 21-12 in the men’s singles badminton final to claim the gold medal at the Tokyo Olympics here on Monday.After tying at 9-9, Axelsen reinforced his strong smashes to take a 21-15 lead. Chen failed to come back and Axelsen wrapped up the second set 21-12.In their previous encounter at Rio 2016, Chen had routed Axelsen 21-14, 21-15 in the semifinal before he beat Malaysia’s legendary shuttler Lee Chong Wei to win his first Olympic gold, reports Xinhua.Earlier in the day, Indonesia’s fifth seed Anthony Sinisuka Ginting needed only 38 minutes to defeat the tournament’s dark horse and world No. 59 Kevin Cordon from Guatemala 21-11, 21-13 and win the bronze medal.Meanwhile, Indonesia’s world No. 6 shuttlers Greysia Polii and Apriyani Rahayu beat China’s second seeds Chen Qingchen and Jia Yifan 21-19, 21-15 in the women’s doubles final here.The Indonesian pair raced to a strong start and kept the advantage till the end. In the second set, Chen and Jia, unable to bounce back, appeared overwhelmed by their opponents.

Jia conceded after the loss that she was still a bit nervous because it was their first time playing in such a huge international sporting event.”We have to admit that our opponents played better than us and they were more experienced, as one of them has participated in the Olympics several times,” Jia said.Chen echoed Jia’s comments. “We have shortcomings, and we should admit them and learn from our opponents.””It was not a perfect result for us of course, we have a little bit of regret, but I think the loss will motivate us all the more,” Chen added. “We will start all over again.”Jia called on fans to believe in them as they are certainly capable of doing better.”Nobody knows what comes next, but we will definitely go for Paris 2024. We are much younger than our Indonesian rivals, if they can make it, why can’t we?”Polii, a three-time Olympian, said she was speechless and couldn’t describe her feelings after clinching her first Olympic medal.”I know I have always learned to be a badminton player and I had that faith when I was just 13 years old,” said the 33-year-old.”I just keep my patience and commitment to realize the dream and reach the goal. The London Olympics made my heart broken, but my family and so many people in Indonesia kept trusting in me and told me not to give up,” Polii said.