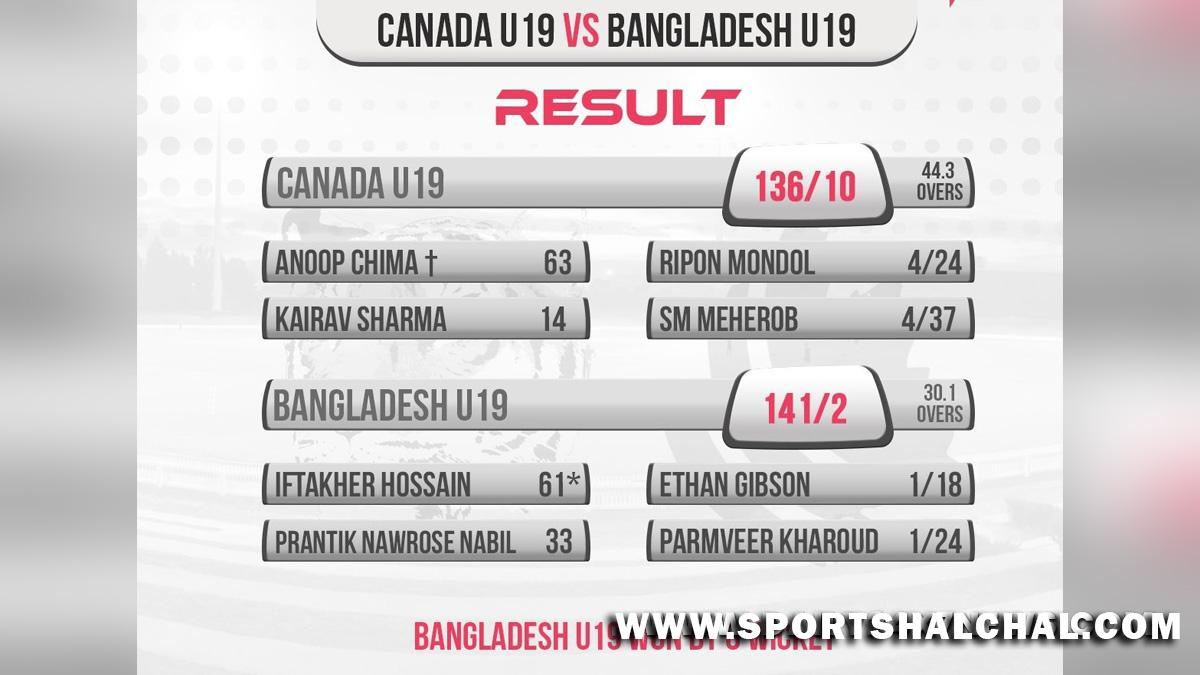 Basseterre (St Kitts) : Defending champions Bangladesh bounced back from the loss to England in their Under-19 ICC Cricket World Cup opener with a dominant eight-wicket win over Canada in a Group A match at the Conaree Sports Club here on Friday (IST).The holders were skittled for 97 by England in their opening game but fared better with the ball after Canada won the toss and elected to bat. Canadian opener and wicketkeeper Anoop Chima made a patient 63 off 117 balls but found little support from his teammates.The other nine batters contributed just 58 runs between them as they were bowled out for 136, despite Bangladesh bowling 15 wides in 44.3 overs.Ripon Mondol starred with the ball taking 4/24 in 8.3 overs, including the scalp of Chima who he had caught behind.

Ripon’s seam was supported by SM Meherob’s off-breaks as he took 4/38 in 10 overs with medium pacer Ashiqur Zaman also chipping in with two wickets.In reply, Canada struck early as Parmveer Kharoud trapped Mahfijul Islam lbw for just 12 but Iftakher Hossain anchored the chase with a 61 off 89 balls. Prantik Nawrose Nabil chipped in with 33 while Aich Mollah, 20 not out from 26 balls, sealed victory in style with a six off Gurnek Johal Singh as Bangladesh won with 119 balls to spare.The reigning champions will now face a straight shoot-out against the UAE on Saturday to see who will join England in the Super League quarterfinals.Brief scores: Canada 136 in 44.3 overs (Anoop Chima 63, Ripon Mondol 4/24, SM Meherob 4/38) lost to Bangladesh 141/2 in 30.1 overs (Iftakher Hossain 61 not out) by eight wickets.