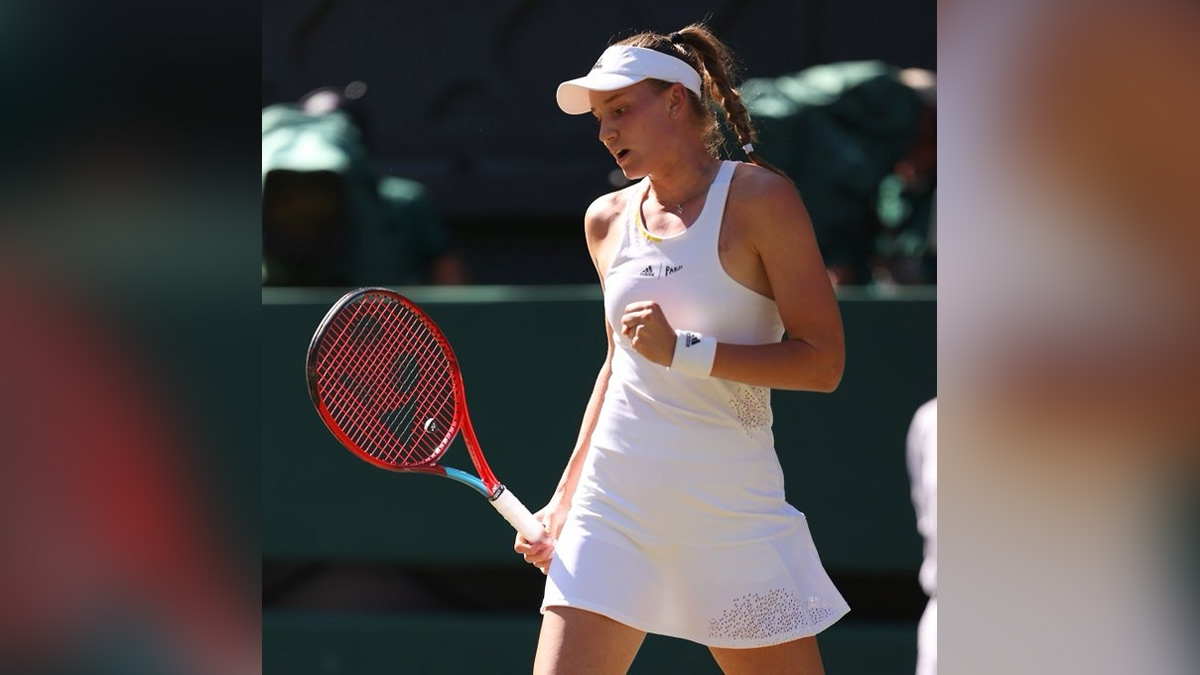 London : Elena Rybakina became the first player from Kazakhstan to reach a major final after defeating 2019 champion Simona Halep of Romania in straight sets 6-3, 6-3 at Wimbledon on Thursday.The 23-year-old Rybakina’s power game has pulled her through the 2022 Wimbledon Championships final.

She blasted her way to victory in just 1 hour and 15 minutes, handing Halep her first loss at Wimbledon since 2018.Rybakina will now face another first-time Grand Slam finalist, No.3 seed Ons Jabeur of Tunisia, for the Wimbledon title on Saturday.

Jabeur leads their head-to-head 2-1, with Rybakina winning their first encounter in 2019 but Jabeur taking both meetings last year.This week, Rybakina became the first player representing Kazakhstan, female or male, to reach a Grand Slam singles semifinal, and she has now gone one step further to break more new ground for that nation.

World No.23 Rybakina, who becomes the youngest Wimbledon finalist since Garbine Muguruza in 2015, is seeking her third career singles title, but her first in two-and-a-half years.Rybakina won titles at 2019 Bucharest and 2020 Hobart, and she reached four finals in her first five tournaments of a breakthrough 2020.

However, Rybakina is 2-6 in finals overall, including a loss to then-World No.1 Ashleigh Barty at Adelaide in January of this year.Rybakina has taken the mantle of “Ace Queen” this season, leading the WTA Tour in that statistic.

She added five aces on Thursday, bringing her total for the year to 219.But Rybakina has exhibited a variety of exceptional shots all tournament, not just the serve. She did so again versus Halep, taking charge from all sectors of the court and hitting 17 winners.

Halep saw her 14 winners undone by eight double faults, two of which came while facing break point. Former World No.1 Halep had not lost a set en route to the semifinals, but she could not blunt the fiery hitting by Rybakina, losing a completed match to the Kazakh for the first time.

Great groundstroke depth, ending with a winning forehand, gave Rybakina an immediate break for 2-0. Halep fended off the next four break points she faced, but she was never able to pull back on serve, and Rybakina swept to the one-set lead.

Halep hit three double faults in her first service game of the second set, but she finally broke Rybakina at love to level the set at 2-2. However, more aggressive rally play by Rybakina in the next game brought her another break point, where Halep double faulted again.