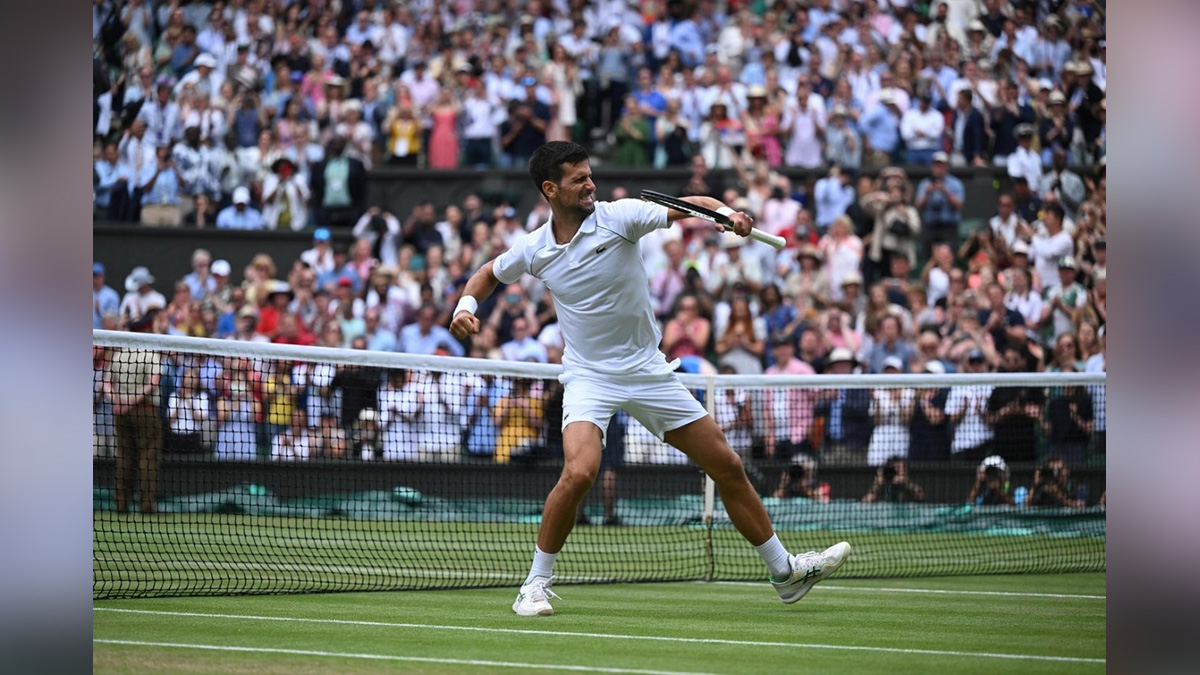 London : Top seed Novak Djokovic came back from a two-set deficit to pull off a stunning quarterfinal victory in five sets over Jannik Sinner of Italy at the Wimbledon here on Tuesday.The top seed engineered a mid-match turnaround to roar back and seal a 5-7, 2-6, 6-3, 6-2, 6-2 victory against the 20-year-old Italian.

Sinner successfully targeted Djokovic’s serve early, breaking it four times on the way to a two-sets-to-love-lead. But the six-time champion from Serbia responded by raising his game by a couple of notches on Centre Court, wrapping up a three-hour, 35-minute victory to extend his winning streak at SW19 to 26 matches.

“Happiness, love, fulfillment, pride, [I feel everything on this court,” said Djokovic in his on-court interview, when asked about extending his winning streak. “I love it. I think the majority of the players would agree this is the biggest tennis tournament in the history of our game, so this court is the most important one, definitely in my career and my life.

“This court inspired me to take the tennis racquet in my hand for the first time when I was five. Every single time I step on this court, the love affair keeps growing, so hopefully, I can maintain that run,” Djokovic was quoted as saying by the ATP Tour website.

For an hour and half, the Centre Court crowd could not quite believe what they were seeing as the 20-year-old Italian had the champion on the run.For the first two sets, he was by far the better player, But on the brink of his first defeat at Wimbledon since 2017, Djokovic rallied.

Despite a couple of magic moments in the third set from Sinner the Italian capped an epic point with a backhand lob in the seventh game and fended off a set point for the Serbian with a stunning angled retrieval of a Djokovic drop shot Djokovic’s groundstrokes clicked into gear.

The top seed sealed the sole break of the third set before he raced into an unassailable 4-0 lead in the fourth to force a decider, according to the report.The momentum was with the 20-time Grand Slam champion Djokovic, and he made it count with an impressive final-set performance.

He offered Sinner a few free points and pulled off some spectacular winners, most notably a backhand on the slide to bring up a breakpoint in the seventh game that had an enraptured Centre Court crowd on their feet.

Sinner could find no answer to the Djokovic barrage, and the Serbian served out to love to reach his 11th Wimbledon semi-final.The win moved Djokovic within two matches of his fourth consecutive crown at the grass-court Grand Slam, where his semi-final opponent will be Cameron Norrie or David Goffin.

The top seed was full of praise for 20-year-old Sinner, who had not won a tour-level match on grass before his first-round victory over Stan Wawrinka last Monday.”I must say huge congratulations for a big fight today to Jannik,” said Djokovic. “I’m sure there are going to be a lot of opportunities on the big stage.

He is so mature for his age, he has been established now as a Top 10, Top 15 player for the past few years.”He’s got plenty of time, it was unfortunate for him today but [he had] a very good tournament and I wish him the best of luck for the rest of the year,” said Djokovic.