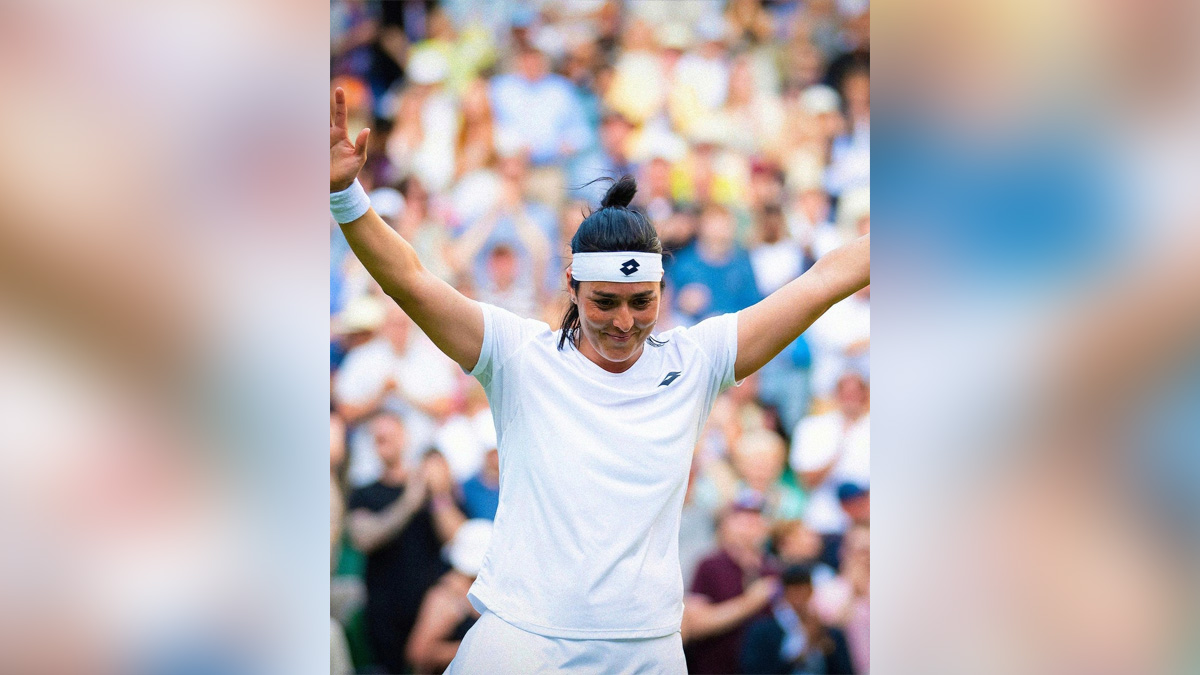 London : Tunisia’s world No.2 tennis player Ons Jabeur rallied from a set down to defeat Marie Bouzkova of the Czech Republic 3-6, 6-1, 6-1 at Wimbledon to become the first Arab or North African woman to reach a Grand Slam singles semifinal.

A year after reaching the last-eight in a historic first for Arab women, Jabeur, the third seed at The Championships, went one step further in 2022, reaching the semifinals at a major for the first time and setting up a last-four clash against Tatjana Maria of Germany.

Across both men’s and women’s tennis, Arabs and North Africans were previously winless in major quarterfinals in the Open Era, including two losses by Jabeur herself; she lost to eventual champion Sofia Kenin at the 2020 Australian Open, and Belarusian Aryna Sabalenka at Wimbledon 12 months ago.

Maria also came from a set down to beat fellow German Jule Niemeier in the other three-set quarterfinal. Maria and Jabeur will play for the first time in four years.”I was hoping that I could get to this stage for a long time already.

I struggled few times in the quarterfinal,” Jabeur was quoted as saying by wtatennis.com.”I was talking a little bit to (Moroccan ATP former World No.22 and four-time Grand Slam quarterfinalist) Hicham Arazi.”He told me, ‘Arabs always lose in the quarterfinals and we are sick of it.

Please break this.’ I was, like, ‘I’ll try, my friend,’ … We were just texting, and he was really happy. He was, like, ‘Thank you for finally making the semifinal. Now you can really go and get the title,’” added Jabeur.Having lost her two previous Grand Slam quarterfinals in straight sets, Jabeur was slow initially against Bouzkova.

She dropped her first set of the tournament in the face of an inspired Czech rival who was bidding to upset the third-seeded player.”I think I played really good from beginning of the second set, especially having a early break kind of helps me gain me the confidence,” Jabeur, who completed the task in 1 hour, 47 minutes, said.

“I know it wasn’t easy playing Marie (Bouzkova). She gets all the balls and doesn’t make, to win a point, easy for me. I’m glad I stepped in with my game. I was more aggressive in the second set, and especially tactically I was playing some angles that she didn’t like much.

“Though Jabeur and her semifinal opponent Maria have played three previous times, all were a lifetime ago in the context of their current careers. Maria won their only tour-level meeting in Linz in 2017, with Jabeur earning wins in qualifying matches at the 2014 US Open and in Beijing in 2018.

“Obviously it’s tough to play her (Maria). It’s going to be a great match between us, a lot of respect, for sure,” added Jabeur.